A separate Department of ECE was carved out of the ET Department in 1947. The ECE Department moved into its present building in 1951. It was inaugurated by the then Prime Minister, Pandit Jawaharlal Nehru. A significant event in the mid-1950’s was the visit of Professor V.C. Rideout from the University of Wisconsin, USA, as a visiting Professor to the Department under a programme called Technical Cooperation Mission. He introduced analog computers as a new line of work. With the help of two faculty members N.S. Nagaraja and S. Sampath, he designed and built Inida’s first analog computer PREDA (Philbrick – Rideout Electronic Differential Analyser). A visit by Professor Norbert Wiener in 1955, and the notes taken by Mr. S. K. Lakshmana Rao, a faculty member, was the forerunner to the course on Information Theory introduced in the curriculum of the Department. A Post Graduate course DIISc(PG) in Electronics Engineering/Ultrashort and Microwave Engineering/Line Communication Engineering for DIISc/B.E. degree holders was started in the Department in 1956. It was the first postgraduate course in ECE in India. 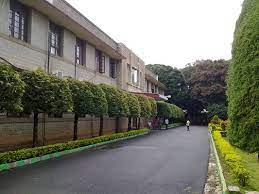 Close association was established with public sector companies like Indian Telephone Industries Ltd. and Bharat Electronics Ltd, and links forged with national laboratories under CSIC, DRDO and other agencies.Soon thereafter, the Institute attained the status of a deemed university and DIISc and DIISc(PG) were rechristened, respectively, as B.E. and M.E..

By the close of the decade of fifties, research had taken roots in the ECE Department in the areas of electronics, acoustics, microwaves and analog computers. Professor S.V.C. Aiya took over as the Head of the Department on the retirement of Professor Sreenivasan. Research activity among students flourished during his tenure. New laboratory buildings for research in acoustics and electron devices came up and the Department expanded from its original single building to the present complex of three buildings. The bust of Heinrich Hertz was gifted by the Govt. of West Germany, in this period, and was installed in the foyer of the Department.

Professor B S Ramakrishna, who succeeded Prof Aiya as the head of department and later Chairman, was instrumental in procuring a large long-term research grant from the Ministry of Defence for starting a research centre called Centre for Information Processing (CIP) in 1971. Though it stopped to exist in 1979, it formed strong roots for research in the areas of signal processing and photonics. Another grant for a research project in acoustics from DOE (Department of Electronics) heralded the era of sponsored research, which has now become a major source of funding for the department.

A centre for Electronics Design Technology (CEDT) was started in the Department in 1974 under an Indo-Swiss Agreement, with the support from DOE and UGC to train engineers and technologists for the electronics industry. It moved out of the ECE Department after attaining the status of an independent centre in 1985. Professor Ramakrishna was the architect of a major change in curriculum and reorganization that occurred in the Institute in 1970. This system is followed till date with minor variations.

Following Prof. Ramakrishna, the position of chairperson of the Department has been held successively by Professors N. S. Nagaraja, N. N. Biswas, R. Chatterjee (who is also the first woman scientist to have pioneered the field of Microwave Engineering in India), B. S. Sonde, M. Satyam, A. Kumar, V. U. Reddy, and A. Selvarajan.

The present day M.E Programmes in telecommunications, signal processing and microelectronic systems began in 1997-98. An industrial Associate Programme was launched in 1996 with the objective of facilitating interaction between the industry and the department. It enables the participating industries – called Industrial Associates – and the Department to make use of each others’ strengths and facilities towards developing a vibrant R&D culture. One of the department’s greatest strengths is its rich heritage and the people who foresaw the potential, in relatively less explored domains, in its early years.